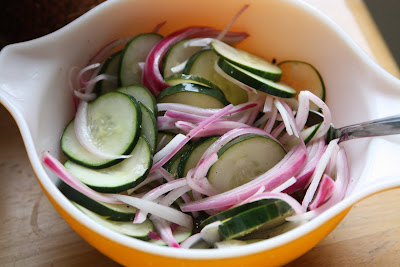 Brief Description: This is another recipe from Doc’s side of the family. I’ve had this dish a few times when visiting his parents. It comes from his grandmother, whom I never met, sadly. I know I would have really loved her though. This salad is a vinegary side with crisp cucumber slices and onion. It’s also already vegan! I halved the recipe since there are only two of us and it accompanied three meals. And since I'm such a pepper fanatic, I added black pepper. And I sliced the onions the wrong way! Gosh! I just can't follow directions.

Original Directions:
Pare and slice cucumbers thinly. Slice onion into thin rings. Place in a bowl with the cucumbers. Bring remaining ingredients to a boil. Pour over cucumbers and onions. Refrigerate at least several hours.