I was craving something casserole-y and thought of doing a mac a cheese. Serendipitously, an unrelated visit to the ppk blog resulted in a drool-worthy shot of "Mac and Shews" in my face, and dinner plans were made! I love the star ingredient, saurkraut, but often struggle with getting through an entire jar of it.

This recipe is good hot or cold, but I don't know that I would put it in the same category as "mac and cheese." With some tweaking I think you could get more creaminess and less tang, but I love this recipe as is, and for what it is. 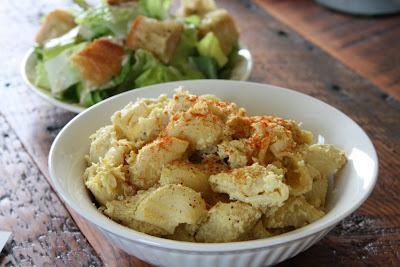 I paired the Mac and Shews with a Caesar salad, using my now world-famous dressing and toasting some croutons. The dressing is never measured and always thrown together. This particular incarnation included Vegenaise, dijon mustard, capers in brine, raw garlic, olive oil, nooch, pepper, and lemon juice.

It was a nice, tangy meal. Followed up with chocolate pudding. Two thumbs up!
at 7:36 PM 3 comments: Links to this post

A preview of what's to come

Under the guidance of a Mr. Joel Verdon, I have been working on several furniture building projects of late. Most excitingly for me, I've begun work on a work/storage station for the kitchen. This beaut will sit in my "nook" area and will house spices, herbs, teas, produce, oils, vinegars, etc. I've installed two rustic shelves full of vintage mason jars containing beautiful legumes and grains above where the station will go. I love how it looks and can't wait until the station is complete!

So far, we've created the legs, beautifully tapered by Joel, and the apron, the front of which will also become drawer space for spices and teas. I brought in a jar of mung beans to my local paint store and found the PERFECT color to match. (This is my absolute favorite color- love it!) The legs and apron have been sanded a few times and painted twice. Each leg has a double bolt to provide extra stability for those awesome doughs I'll be kneading. 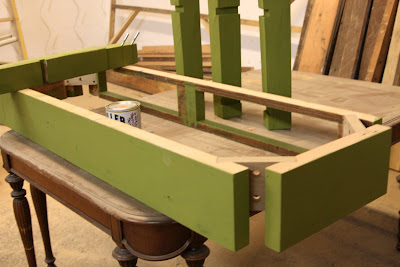 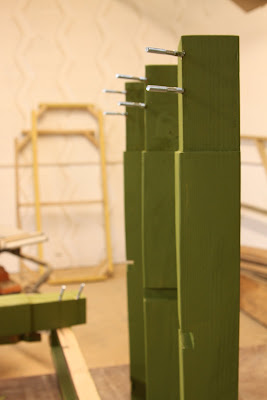 More photos soon! Hopefully the entire project will be complete by next week.

A couple of cuddling doggle shots: 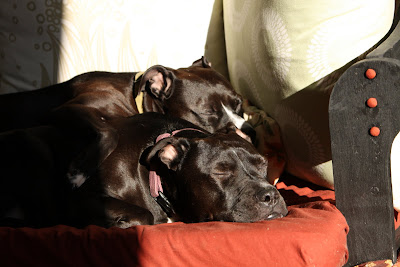 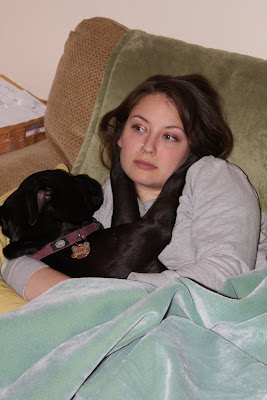 Doc snapped this one when Emerson came to cuddle with me on the sofa last night and put his arms around my neck. A very unflattering photo of me.
at 5:21 PM 3 comments: Links to this post