When I was pulling out the ingredients to make Pad Thai for dinner, I realized I didn't have enough rice noodles. I decided to make rice instead and so we have "Pad Thai Stir Fry," which is actually kind of fun to say.

I made a sauce out of tamari, peanut butter, chili sauce, sugar, vegan Worcestershire sauce (which had tamarind in it), lime juice, and water. 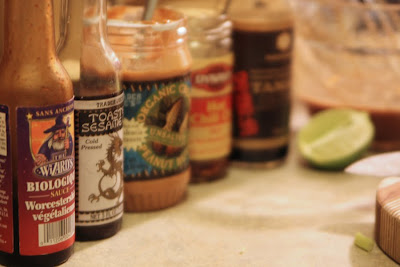 While the rice was cooking, I sliced green peppers, minced garlic, and cut carrot match sticks. I pan fried tofu in a sesame oil/canola oil combination, until browned on both sides, then took it out to drain on a clean rag. 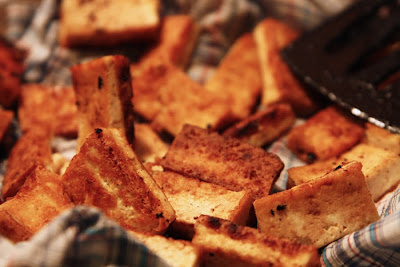 I briefly cooked the veggies in some sauce, added the tofu to the mix, turned the heat off, and then tossed in a bit of cilantro and green onion. 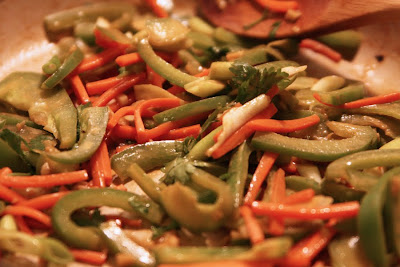 I plated the dish, putting the rice on the bottom and topping with the veggie mixture. I like my Pad Thai extra saucy, so I added more sauce at the end. A squeeze of lime juice and, voila! I finally made a good Pad Thai sauce. I'll have to try the dish with rice noodles next time! 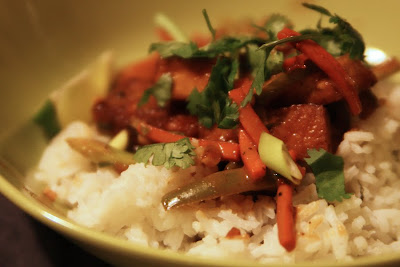 Okay, final photo doesn't look great. I was anxious to eat and didn't feel like setting up the lamp!
at 8:50 PM