Well, in two hours, Vegan MoFo 2009 officially draws to a close. It's been a fun furry of food-making. I felt oddly guilty when, occasionally, I wasn't able to get a post up like I was supposed to. Being forced to make more food than usual meant that coworkers and friends got a lot of free vegan food during the month. Okay, I wasn't really forced. I enjoyed playing with new ingredients and recipes. I also LOVED reading others' posts, and look forward to continuing to do so. A great thing about MoFo was that I was exposed to some great new blogs. The downside, of course, is that I'll now be spending even more time on the computer.

A and J are two more awesome animal lovers that I met in Gainesville. This dynamic duo went vegan together and do many great things for animals. There were AR meetings, potlucks, volunteer events, VegFest, and other events. My fondest memory of J is volunteering at Rooterville Pig Sanctuary in Alachua, FL together. I really miss that place and the great people behind it! J even interned for Rooterville.

A is super awesome as well. This past February I got the chance to hang out with her and T-Cat for a weekend in D.C. We had a lot of fun and the experience made me wish even more that we had spent more time together when we both lived in Gainesville.

In honor of the awesome vegan that is J, I decided to make "Pigs Are Safe in the Barn," a simple vegweb favorite. I even decorated the plate with ketchup and mustard designs, including a barn, and sauerkraut hay. (I have to admit that DocDufresne actually made the little piggies!) We also had a simple steamed yam/beet/turnip dish with garlic/lemon sauce (not pictured). 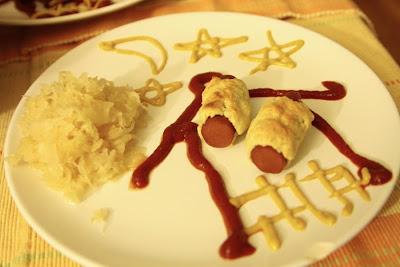 In honor of A, I decided to make cinnamon rolls, as I can barely think of cinnamon rolls without thinking of our multiple trips to Sticky Fingers in February. These were from Vegan Brunch. I brought them to the Cares4Pets adoption event today, where we had hoped someone would fall in love with Henry. It remains to be determined if this actually happened. Fingers crossed. The cinnamon rolls were enjoyed. (Even though I didn't let them rise either of the times they were suppsed to rise!- Hey, I was in a rush!) 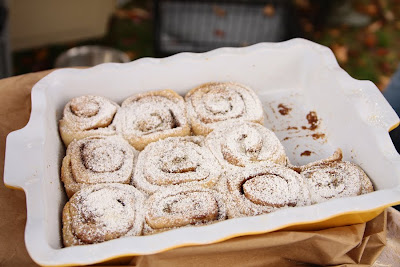