Ladybeth is the victim of my third Vegan Tribute this week. It's also her birthday tomorrow! Happy birthday, Ladybeth!

Since I began my adventure into veganism, Ladybeth has served as more than a good friend. Having made the decision to become vegan before she was even a teenager, Ladybeth has been a mentor to many individuals like me. I've been known to call her while out shopping to ask about an obscure ingredient in some cosmetic or article of clothing. Ever helpful and never condescending, Ladybeth is an approachable animal rights activist that has led to great change in the movement. Enough about that!

Ladybeth is also so much fun to hang out with, and in school, Ladybeth, Shivels, T-Cat, and I were great friends! I'm still awestruck that we were able to meet in Gainesville and have so much in common. The four of us now live in different parts of the country, but we see each other here and there and will get to share VEGAN THANKSGIVING next month- I know, I know, I've already mentioned that A LOT!

I heart Ladybeth's taste buds. When we go out to eat, the two of us usually are deciding between the same two dishes and each end up getting one of each to share (as long as the dish doesn't have tomatoes or arugula for her!) When it comes to cooking, Ladybeth is a pro. No recipes needed for her. The first dish I'm serving up today in honor of Ladybeth is one that she created for a dinner that she hosted just before she graduated. This is a massaged kale salad with avocado, lemon juice, salt, pepper, and pomegranate jewels. 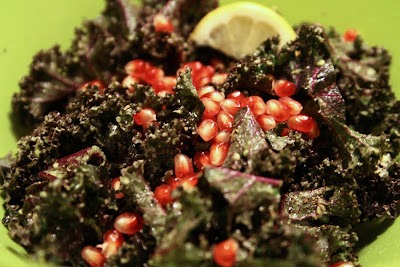 Secondly I've created a tempeh Reuben sandwich, a menu pick that you can bet she'll order when she sees it. I opted for the mustard version of this sandwich, but also added a light slathering of Vegenaise in addition to the sauerkraut and fresh red cabbage. I took a cue from Isa's recipe for the sausage puffs in Vegan Brunch and marinated the tempeh and then baked it. I made it very peppery and it was almost reminiscent of pastrami. Very good. 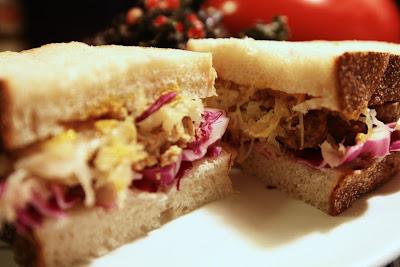