VEGANMOFO 2009: My Own Cookbook Challenge 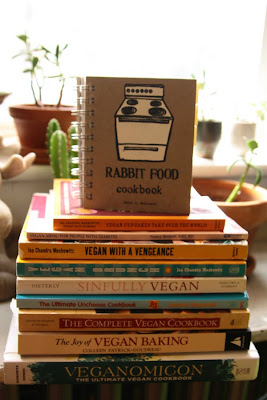 Announcement #1: This week I'll be doing something that I do far too infrequently- using new recipes from my cookbooks. I tend to do two things, A. The tried and true approach- when I find a recipe I like, I continue to make it; B. I like to collect vegan cookbooks and sometimes it takes me a looong time to try out a good number of recipes.

This week I will make an attempt at getting better about this. I have ten vegan cookbooks (plus a couple of zines) and plan on trying a new recipe from each this week, which equals about two a day. I'll review both the chosen recipe and the cookbook. Here are the ten cookbooks in the order found above:

Announcement #2: DocDufresne and I have a very new house guest. We were driving home from Target on Saturday evening and trotting alongside a busy road in the cold rain was a severely emaciated pup. We took him home, cleaned him up, fed him, got him checked out by the vets of Care4Pets, and are fostering him for now. We're looking for a more "permanent" foster home, or even better- a forever family. He needs a stress-free place to recuperate. We cat tested him today and he did very well. We don't know how he is around other dogs. Anyway, I'm not going to post the crazy scary pictures of him since I don't want to rain on MoFo's parade, so here's one where you can't tell quite how skin-and-bones he is. He's uber sweet and we've named him Henry. For more information (or to have your heart broken by his skinnyness) visit Henry's Petfinder page and if you're inspired, as the kind readers of Balloon Juice were, feel free to donate *any amount* toward his veterinary care, which will be provided by the benevolent souls of Cares4Pets- any support is sooo appreciated and goes a LONG way! <3 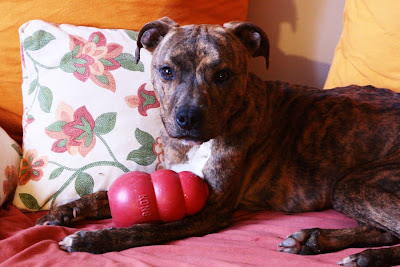 Now on to the recipes!

Chocolate Chip Cookies from the Joy of Vegan Baking 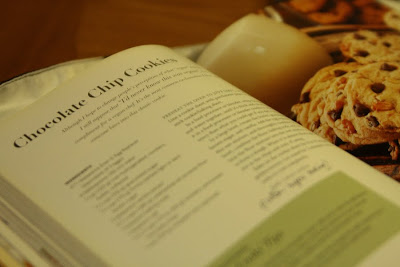 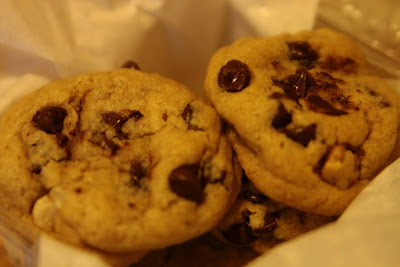 The recipe: I actually didn't really care for the cookies when they were fresh from the oven, but after they cooled for a bit, they were yummy! These chocolate chip cookies don't flatten all that well on their own, so you might want to pre-flatten them if you're using this recipe. I added walnuts and used my favorite chocolate chips- the "vegan" semi-sweet 365 brand. They're good enough to bring into work tomorrow and label them "vegan."

The book: The best thing about The Joy of Vegan Baking is the fabulous photos. I have vowed never to buy another cookbook that lacks a good number of photos. The recipes that I've tried have been good, but truth be told, this is one of those that I categorize under, "collecting dust on the bookshelf." I really should take it out more often!


Lentil Soup from Rabbit Food Cookbook
Purchased from Herbivore when DocDufresne and I were there for our Agavemoon last year. (I think I actually bought this as a gift for someone and never gave it to them- whoops.) 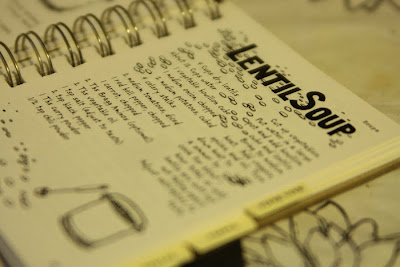 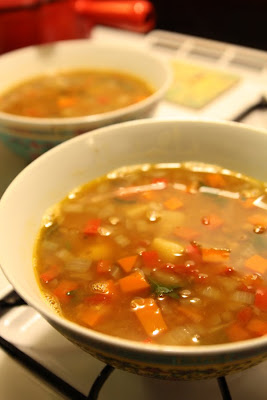 The recipe: I tweaked the soup slightly as WF didn't have celery (doubled the carrot). I also doubled the curry and chili powders, used tamari instead of braggs, and used marinara sauce instead of fresh tomatoes as I had some that I needed to use. I know the photo doesn't make the soup look very appetizing, but this was really good. It wasn't intensely flavorful, which I definitely look for sometimes. This would be a good soup for those days when you're not feeling 100%.

The book: I LOVE Rabbit Food Cookbook! The illustrations are so cute and unlike many non-traditional cookbooks, it's easy to navigate through. It has handy little tabs for the different types of dishes, an index, etc. I think this was the first time I used it...oh boo on me. I will be using it again, though. Promise!
at 10:09 PM